If Testers were Paranormal Investigators 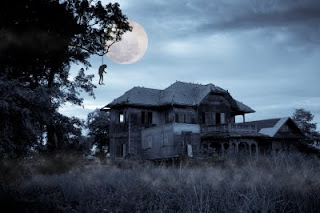 Image: Witthaya Phonsawat / FreeDigitalPhotos.net
http://www.freedigitalphotos.net/images/view_photog.php?photogid=3116
I thought considering it is getting close to the spooky time of year (All Hallows Eve) I would put together a tongue in cheek article about what would happen if exploratory testers were paranormal investigators.

It was a dark moonlit night as the certified and exploratory tester approached the dark imposing building that their project manager had asked them to look at. The project manager wanted them to report back on if the building was suitable for him to move into and that there were no hidden surprises. They had heard stories that the building was full of bugs and other scary stuff.
The testers used the (pass) keys to enter the building and slowly walked into the main hallway of the building. As they started to walk around the room suddenly got cold as the temperature dropped.

The certified tester says it must death being down the temperature.

The exploratory tester looks around the room and notices that there appeared to be a draft coming from just outside the room. They go to explore the draft since it has now interested them as something that could answer a question. Once outside the room they notice that one of the windows has come open due to a broken catch. They close the window and make a note to contact a handy man in the morning. The temperature of the room returns back to normal.
The testers slowly move towards the kitchen when all of sudden an overwhelming disgusting smell overpowers their senses.

The certified tester is certain that this is the smell of death coming to get them.

The exploratory tester is not sure and starts to use their sense of smell to see if they locate where the smell is coming from. They notice that the smell appears to get stronger in the direction of the fridge. They open the fridge door and note that the fridge does not appear to be working (even noticing that it is plugged in) inside the fridge there is a bottle of gone off milk which appears to be the source of the smell. They make another note to contact a fridge repair person in the morning.

The testers now move to the next floor in the building when suddenly they appear to see something move on the stairwell.

The certified tester is sure that this is a sign of sprits from beyond the grave.

The exploratory tester takes a moment to think about possible reasons for the movement before realising that the window has come open again causing the light fitting to swing and cast different light patterns on the stairwell giving the impression of movement.

They now move towards the main bedroom on the first floor and suddenly they hear unnatural sounds and what appears to be a creature from another world.
The certified tester is certain that this is souls from the other side warning them to leave and now starts to panic.

The certified tester is not so sure and even though they are starting to get a little scared they open the door to the main bedroom and the noise gets louder and louder. With their heart pounding they enter the room and see a large irregular shaped mass on the bed from where the noises are coming from. Slowly they move forward get closer, closer still and even closer……..


Suddenly the mass moves and the exploratory tester notice that it is their project manager fast asleep and snoring, the snoring which is causing the supernatural noises.

Loosely based upon the following article: http://www.wired.com/magazine/2011/09/pl_screenghosthunters

Disclaimers:
• All characters appearing in this work are fictitious. Any resemblance to real persons, living or dead is purely coincidental.
• I wish to stress that this blog in no way endorses a belief or non-belief in the occult or anything of a supernatural nature.
Posted by Unknown at 06:04 No comments:

The following blog article is based upon a lightening talk I gave at the Software Testing Club Meet Up in Winchester on the 19th Oct 2011.

I have recently been on holiday touring the Yorkshire dales, moors – covering over 1000 miles in one week. The car is fitted with a sat nav which is great when we want to get from A to B but also I have in the car a large scale map of the UK. I started to think about how we use these two ‘tools’ and how this could be used within testing to show the difference between following a set of instructions (scripts) and exploring the countryside (ET)

An example is that both have the same goal (mission) I want to get from A to B. However we use Sat Navs to show us the most direct, quickest, fastest way (some Sat Navs do now have an option for scenic route)

So I set off into the Yorkshire moors using the large scale map (my wife being the navigator), we knew where we wanted to end up, but the route we took was through the back of beyond. (In fact one the roads we ended up on did not even appear on the Sat Nav map (saying we must return to a digitized area – bug?) We explored the areas and when we noticed things that appeared interesting we took a detour and explored these areas. It was wonderful experience and we found places of interest that were outstanding in natural beauty along with all the seasons in one day (sun, rain, hail). At the end of the journey we had discovered some great things but still ended up at the place we wanted to be, yes it took more time (slightly) but we found out more.

My point is that if you stick to using the sat nav you end up at the same place but you may miss so much that is interesting. Now can we compare this to testing? Yes a script ‘may’ be useful from getting you from A to B but how much will you discover, how many surprises will you find? Yes I could repeat the same journey again since we have the map and know the route I took. Would I want to repeat the exact same route? I am sure that if I went to that area again I would be tempted to go a slightly different way since there could be things around the corner that may interest me.

Rob Lambert pointed out the following to me:

“I find the sat nav is a safety and re assurance aid also in that i can explore but then turn the sat nav on, or refer to it, to then return to a known route.”

I would question this is the sense that it could lead to a false sense of security. What happens if the map gets corrupted, or the electronics fail? I would tend to think of the paper map as the safety, reassurance rather than the sat nav which may have a tendency to fail.

With regards to the meet up in Winchester - I wish more people would have come along they missed a great evening of testing discussions with Michael Bolton being on top form. There are plans to have a regualr bi-monthly meet up in Winchester in the near future - watch out for an announcement via the software testing club soon.
Posted by Unknown at 03:40 2 comments: