This is a follow on to the post I recently did about the automation pyramid that Richard Bradshaw gave at MEWT.

Following on from this some in the testing Twitterverse asked if Richard and I would do a video for the new initiative created by Richard called Whiteboard testing.  Instead of one video we decided to do two.  The first looked at the history of the test automation pyramid and you can watch it here: A look at the test automation pyramid.  The second video was a chance for me to present my own model which I have called the test execution model and can be seen here: - John Stevenson Test Execution Model.


After the video was posted I had a message from Dan Ashby who wanted to discuss more with me about the  test execution model and what he felt was missing.  We arranged a chat and discussed the model and broke down a few assumptions we were both making.  The outcome from this chat was the need to add a few extra parts to complete the test execution cycle.  With thanks to Dan I would like to present the next generation of the model. 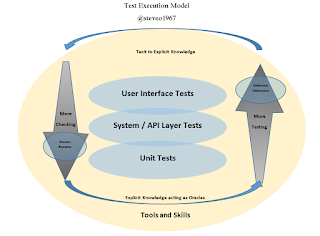 The changes that Dan suggested for the model are as follows:

This then gives a cycle of test execution were the testing feeds into the checking which in turn can feed back into the testing.  It should be noted that is model is for test execution which does not only apply to only testing the product deliverable.  Testing is carried throughout the development cycle and as such testing activities can occur during artitecture & design discussion and during coding. Testing activities can and should occur anywhere during the development and deployment of the product and this model should be used in that context with regards to test execution.