This is the first in a series of posts I plan to write after attending the fourth MEWT peer conference in Nottingham on Saturday 10th October 2015.

Before I start I would like to say thank you all the organizers and for inviting me along and a BIG MASSIVE thank you to the AST for sponsoring the event,

Earlier on in my career, I used to follow this pyramid, encouraging tests lower and lower down it. I was all over this model. When my understanding of automation began to improve, I started to struggle with the model more and more.

I want to explore why and discuss with the group, what could a new model look like?

During the session Richard explained his thoughts about the test automation pyramid created by Mike Cohn in his book Succeeding with Agile and how the model has been misused and abused. 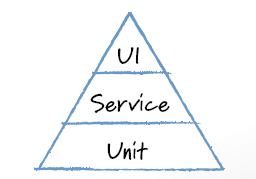 Richard talked about how the model has adapted and changed over the years from adding more layers.. 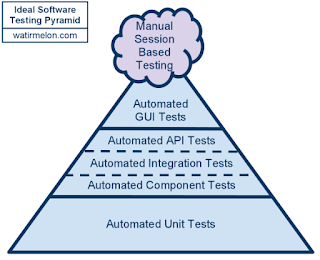 ...to being turned upside down and turned into an ice-cream cone. 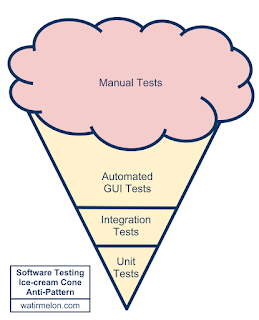 Duncan Nisbet pointed out that this really is now an anti-pattern - http://c2.com/cgi/wiki?AntiPattern.  The original scope of the diagram by Mike was to demonstrate the need to have fast and quick feedback for your automation and as such focused the automation effort to the bottom of the pyramid. Where the feedback should be fast. The problem Richard has been experiencing is that this model does not show the testing effort or tools needed to get this fast feedback.  It also indicated that as you move up the pyramid less automation effort was needed or should be done.  The main issue for Richard was how the pyramid has been hi-jacked and used as examples of the priority of effort should be on automation rather than focus on the priority of both in given contexts.

Richard presented an alternative model in which both testing and automation with the tools required could be shown on the ice-cream cone diagram. 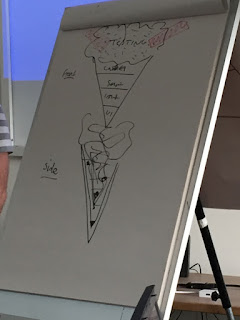 With this diagram the sprinkles on the top were the tools and the flakes the skills.  He then in real time adjusted the model to say it would be better as a cross-sectional ice-cream cone with testing throughout the cone and the tools across all areas of the original pyramid.  Many attendees liked this representation of the model but some thought that it still encouraged the concept that you do less of certain testing activities as you move down the ice-cream cone.

At this stage I presented a model I had been using internally to show the testing and checking effort. 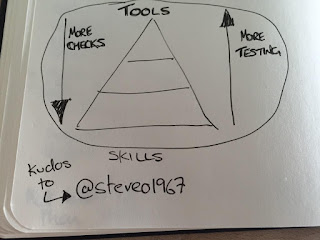 Again people thought this indicated that we need to do less as we move up the pyramid and it went back to the original point being made by Richard that the pyramid should die.

After MEWT I thought about this problem and tweeted an alternative representation of the diagram. After a few comments and some feedback the diagram ended up as follows: 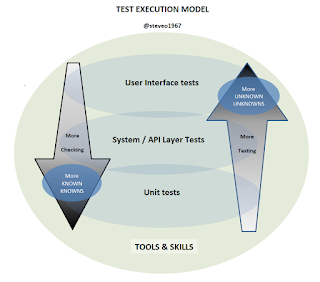 With this model the pyramid is removed. Each layer has the same value and importance in a testing context.  It shows that the further up the layers you go the focus should switch more from checking to testing and the lower down the focus should be on automating the known knowns. All of this is supported by tools and skills.  As a model it is not perfect and it can be wrong for given contexts, however for me it provides a useful starting point for conversations with those that matter.  It especially highlights that we cannot automation everything nor should we try to do so.

In summary the talk given by Richard was one of the many highlights of the day at MEWT and inspired me to look further into the test automation pyramid model and its failings.  I agree with Richard that this original model should die especially in the way it is often misused.  Richard provided some useful alternatives which could work and hopefully as a group we improved upon the original model.   Richard did clarify that his ice-cream cone model with sprinkles is not his final conclusion or his final model and he will be writing something more on this in the near future.  His blog can be found here - http://www.thefriendlytester.co.uk/.

Now it is over to you, please provide your feedback and comments on this alternative model.